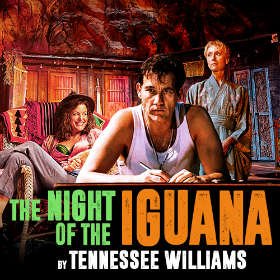 The Night of the Iguana

The first thing to say about this – one of Tennessee Williams' best loved plays – is that there really is an iguana... but nobody has the faintest idea what it represents. So let's leave that side of things and dive into the plot! Picture this. You're stuck down in Mexico, high above the west coast. You're trapped in a tatty hotel thanks to a violent tropical storm, along with a group of fellow lost souls. The clergyman, the Reverend Shannon, is a defrocked priest-turned-tourist-guide. The grieving widow who runs the hotel is missing her husband acutely, drowning in tears. There's an uncannily jolly family of Nazis and a female portrait artist, travelling with her 97 year old poet granddad. And when they clash, as the rains thunder down, an epic battle takes place between the pleasures of the flesh and the purity of the spirit.

This is a brand new London revival of Tennessee Williams’ classic, and it stars the brilliant Clive Owen in the lead role of the Reverend. It opens at the Noel Coward theatre in early summer 2019 and it's on for a strictly limited 12 week season. It is directed by James MacDonald and stars Anna Gunn as Maxine Faulk, loved for her role as Skyler White in the epic TV series Breaking Bad. The prolific West End heroine Lia Williams, who recently wowed audiences for her role in Mary Stuart, stars as Hannah Jelkes. Don't miss this all-American 1959 classic.