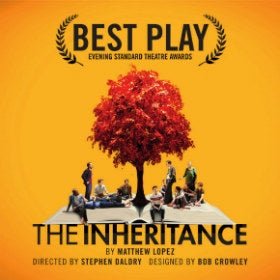 The Evening Standard calls it 'Witty, outrageous and deeply moving'. According to The Telegraph it's 'Perhaps the most important American play of the century so far'. The Guardian says 'Stephen Daldry’s crystalline production pierces your emotional defences' and The Independent says the acting is 'extraordinarily accomplished'. According to The Times it's 'an epic work.' What more can we say? New York playwright Matthew Lopez has pulled another masterpiece out of his masterpiece-stuffed hat, and he's achieved a very well-deserved West End transfer.

If you've ever wondered about the legacy left by the AIDS crisis a generation ago, this one's for you. What can you expect? Set in the present, a generation after the AIDS crisis peaked, The Inheritance explores what it's like to be a young gay man in today's New York. The result is hilarious, profound and heart breaking, involving multiple generations and interlinking multiple voices as the play cleverly transposes EM Forster’s brilliant novel Howards End smoothly into the 21st century. A huge ensemble cast brings the play to vibrant life, and you can either catch both halves in one day on Wednesdays or Saturdays, or see the two halves on different week-nights.