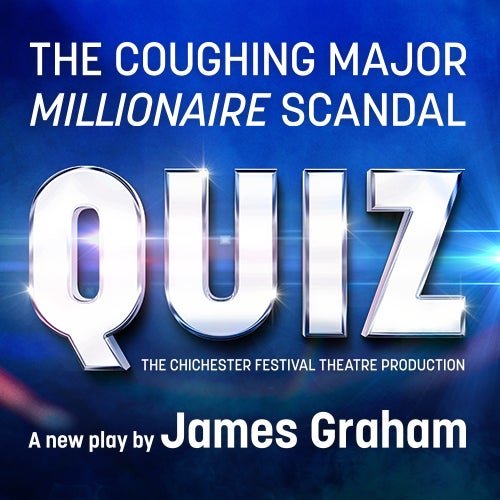 It’s the big question – would you cheat to win the jackpot? Major Charles Ingram did, winning £1 million on Who Wants To Be A Millionaire? and starting the “coughing scandal”, for which he was convicted in 2001. Now James Graham has captured the events, as well as the quintessentially British love of a TV game show, in his latest production QUIZ, which will play the Noel Coward Theatre from 31 March 2018 for just eleven weeks.

QUIZ played first at Chichester Festival Theatre under the direction of Artistic Director Daniel Evans. Evans will accompany the transfer to London after the success of his last transfer to the same theatre – Half A Sixpence played for just under a year and received three Olivier Award nominations. Full cast and creative team are yet to be confirmed.

Graham’s success on the West End began in 2012 with This House – he has gone on to write other political theatre successes such as The Vote, which was performed live during the 2015 Parliamentary Election results. In 2017 alone, Graham had two plays concurrently in the West End – INK is currently on until January 2018 and Labour of Love, starring Martin Freeman and Tamsin Greig, closed in December 2017 at the Noel Coward Theatre.